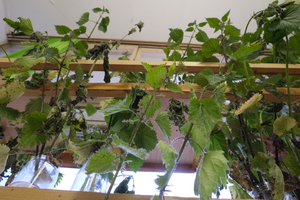 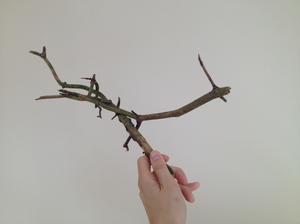 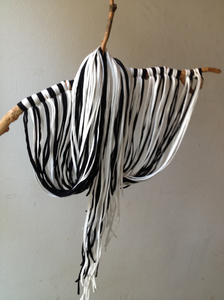 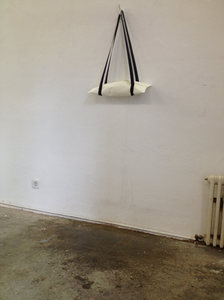 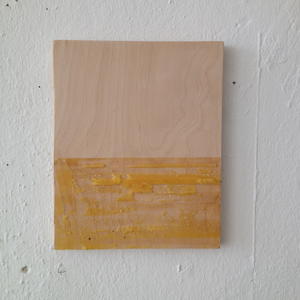 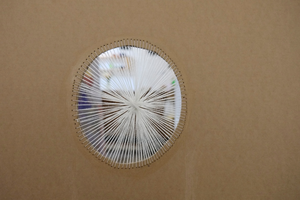 caught in concepts, detail
object
2019
This work was created on the basis of socio-cultural interest. The sculptural installation "cought in concepts" is a two- and three-dimensional form that deals with ideological concepts as a form of identification. Using the example of Christian religious history, I recall a page in the chapter of humanity, how group behavior and iconography behave over time.As a result of "lost in concepts" in which the focus was on the individual lay in the exercise of concepts, this variant is about the community (eg group, state, WG, scene, etc.) which is responsible with even greater consequence ,
The recesses in the places of the minds, through a playful handling; - like a saint figure - had interactive potential, have disappeared. Surrounded by an entanglement that results from the circular shape and distance, the depicted historical persons have neither mouth nor eyes.
The possibility of an individual face has disappeared and addresses issues of individual expression in structural power structures. 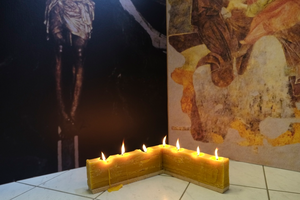 lost in concepts
interactive installation
2018
This work consists of a cardboard display with photo prints of a Venetian Madonna with adult Christ child in his arms and the crucifix from the Sistine Chapel after restoration in Rome.A beeswax candle cast at the same angle could be lit. After Motto holds twice better, one can turn with the expression of a desire equal to two religious power holders at the same time.This participatory work made spiritual concepts: people bearers of holiness, for example Prophets, Objective Self, costumedesign,  communication with a Higher Self, power and projection etc.
The mold of the candle are individual wooden panels that define the time frame with the remaining wax residues until the candle has become dimensionally stable.

"understanding Dichte"
sound-sculpture
2018
As an artist who likes to move a lot of material short, intense pictorial poems were created. Two voices are interwoven. The form of synchronicity creates disharmony and harmony. Duplications of the smallest lutes and linguistic images lead through a rational and emotional understanding, to a density of information and acoustic impressions that leave a great deal of space for personal associations and interpretations. The poetry ensemble becomes a document of an inner state of overburdening and frustration with a poetic potential that allows the understanding of two different textures only in pieces.
Author and speaker German (Mirjam Dorsch) and English (Keren Shalev). 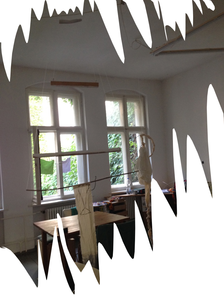 fish in the triangel
Exhibition practice Eating, reading, working
2018
For the summer festival "Lost Time" NK ^ 2 with Mirjam Dorsch, Katharina Kamph, Qing Lu, Mario Margani, Sabrina Schieke, Huatschao Chen and guestsfind in a shared work space of three monthsActivities and actions take place in the interspaceof conceptual and applied art and so onto look at aesthetic, craft and social ideas from a more distanced field.The potential of this convergent approach, which relates to the site, the artists of the n-life group and the intuitive generation of ideas and implementation, lies in the creation of new reception possibilities and their complexity to enable sensory perceptual phenomena in a lifelike environment.I also present three sculptural, textile contributions on the subject of transformation. A Performance Witch Circle (see article below) as input happening and a reading with Keren Shalev, ask questions about the limits of art in everyday life and practices of stage experience. We offered workshops for sewing, cooking and making kombucha and painting Chinese characters. These developed both as installations with clear gestures of interventions by different actors, as well as the possibility to expose the origin of aestheticized manipulation down to their roots. 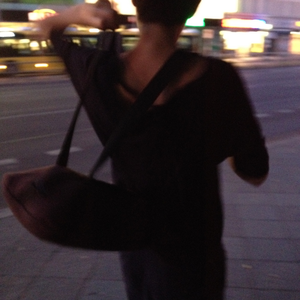 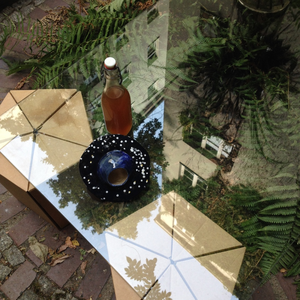 ceremony
ceremony ans object at SommrfestNK^2
2018
a ceramic cup with integrated plate goes a round
with self made kombucha (a symbiotic relation between yeast and fungi
become a fermented, slightly alcoholic, lightly effervescent,
green tea for health benefits )
like fungi grows in circles they integrate e.g. stones in there perimeter
if it comes in between we also focus on the space between.
and as we pass the earth-shaped cup- we also might be aware of
stars who did not collapse into black holes. 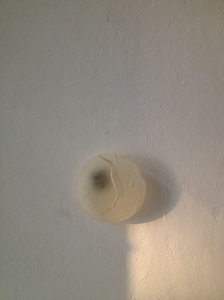 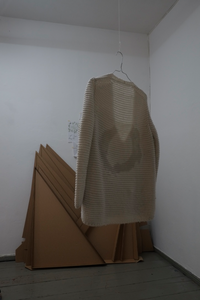 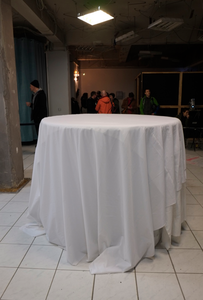 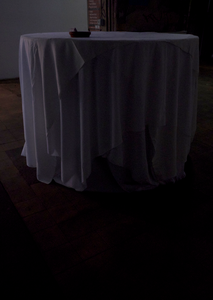 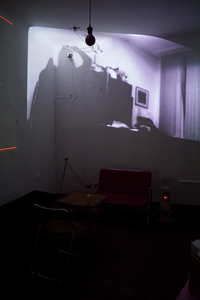 "What it means to dance"
roominstallation two canal video
2018 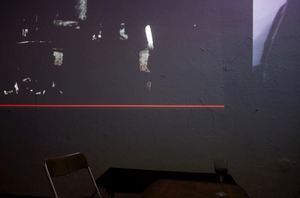 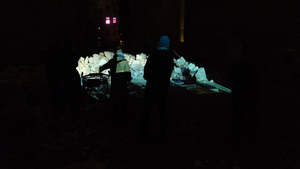 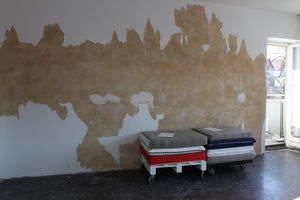 interview with oneself with two
installation
2018 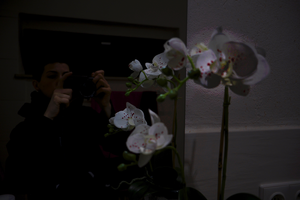 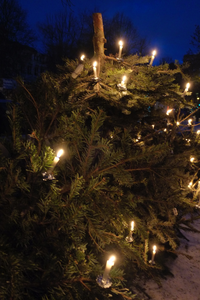 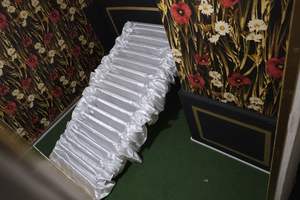 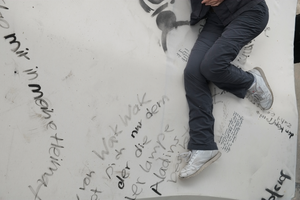 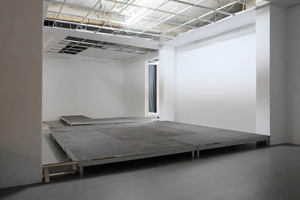 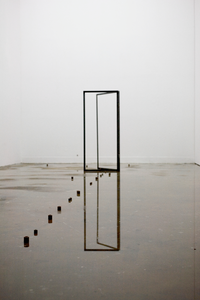 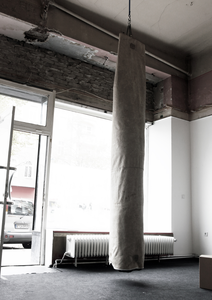 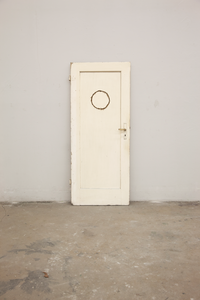 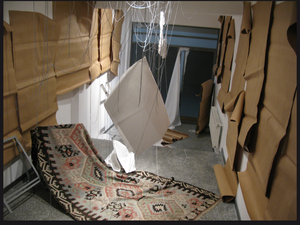 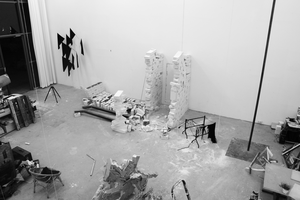 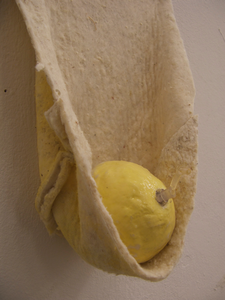