Press Release 'Once In A Red Sun' 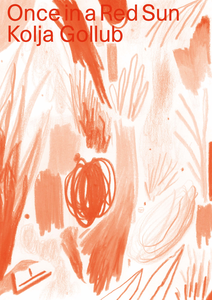 In the last three years, Kolja Gollub, an artist living in Hamburg, has developed a fluid optical language in his paintings and drawings. Using coloured pencils for small drawings, and mostly heavy oil-based paint sticks for large canvases, his vision is based on a scriptural language of vivid strokes for loose marks in motion that largely avoid any overlapping with each other. Gollub's goal is to create a breezy space, made airy by including the white of the canvas or paper in the subtle modulation of his colours, whose hues are more the result of the value of light and shadow, than of their chromatic purity. There is a kind of bliss in the way these configurations float over the image's surface, and the artist attempts various means to counterbalance this energy, be it by introducing scarce geometric reminders of gravity, or by placing dark, weighty marks that also augment the depth and strength of a composition. Most recently, he has been experimenting with juxtapositions on canvases whose deep glowing surfaces of monochrome dark green are sternly marked with some black geometric signs.
The invitation from KBH Kunsthal in Skive, gives the artist the rare opportunity to show his work in lofty and transparent encasements, when exposed in the glass showcases of its park.