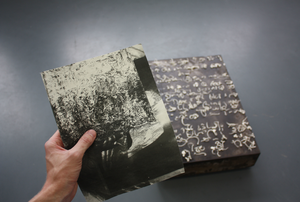 It was the fifth of July, two thousand and sixteen, around eight o’clock at the opening of the Meisterschüler graduate show. The speeches had been made and the space was filled with visitors. There was a concrete plinth with a white, noodle-like constellation on its surface in the corner of the space where I then headed. Some visitors had already gathered around the object that, for this evening, I would declare a ‘text’. In my hand, I had a sheet of paper with an image on it. It was a greyscale digital print that, for the duration of the evening, would not really be discussed. I would declare the sheet of paper a ‘mobile artwork’.

An intervention began as I approached the visitors and explained to them that they were looking at a text that describes the artwork that I was holding in my hand. The Mobile Artwork was handed over to them so that they could give it a better look. It was usually compared to the object, which, when held in the hand, is perspectively a similar in size. This is usually where the discussion would start. Most questions revolved around the nature of the writing: the extent to which it can be read; its materiality and the process of its making*. This usually led to the evocation of the ‘conversation pieces’. The Conversation Pieces were not physically present within the space, but were vividly described and created in the visitor’s imagination. It was told that one of the objects (a worn enamel bowl) was essential in producing the writing. It was claimed that the other object (a brand new plastic tube) will be used in future time to manipulate the writing. Whether or not they really exist was not revealed to the visitor. With each visitor or group of visitors, the depth, level, pace, tension and intricacy of conversation and narration would differ. And so would the created imagery differ in its dynamism, vividness, and essential qualities.

Flatulance**: Mobile Artwork, Conversation Pieces, Text, as I have decided to title the work, materializes through various interrelated channels, namely as a text-object (modelling clay on concrete plinth) and its referential image-object (digital print on paper), as well as through the artist’s physical presence and his bodily and verbal expressions. But it also exists in immaterial form through the appropriation of the exhibition format and its ceremonial discourse, as well as through semantic-imaginative faculty.

The work is still developing or rather deteriorating. The task of creating the Conversation Pieces has been handed over to the exhibition supervisor. New visitors will hold and fiddle with the sheet of paper, leaving their traces onto the artwork. The images evoked in the minds of the visitors will become vague memories, but perhaps questions will grow. They may wonder if I have already flattened the writing and what it would look like. I am myself gradually forgetting what my readings of the image on paper were and the hybrid form of my writing is becoming ever more enigmatic to myself. At some point it will not be possible to retrieve much of my original linguistic thought from it. Only through wild speculation and new interpretation, could I attempt at making semantic sense out of it again.

In some conversations with visitors I would go into a great deal of detail regarding the creation of the writing: Three days before the exhibition opening I went on site and arranged the items I would need to produce the text. This included my Mobile Artwork, a concrete plinth, a heap of modelling clay, a kettle, an enamel bowl (one of the Conversation Pieces), a large container filled with ice water and two syringes. In a meditative state, I would analyse and recollect my thoughts about the image (Mobile Artwork) in front of me. Water is boiled in the kettle and poured in the bowl. The syringes are filled with modelling clay and placed in the hot tub of water. I try to formulate my thoughts linguistically and, as soon as the clay is melted, I take the syringe and spray my airborne handwriting into the icy water. The linguistic formulations in my head proceed at the tempo of spoken language. The clumsy spray-writing can hardly keep up and as a result only some of the fleeting concepts materialize. The action of writing is a mixture of conventional handwriting from the English lexicon, of expressive gesture and impromptu symbol creation. As the liquid clay flies through the air and hits the cold water, a sudden transmutation occurs and it hardens into rigid shapes—like liquid thought crystallising into concepts. The formations are fished out and recomposed on the plinth surface. A slight adjustment to the syntax occurs. Due to the measure of improvisation and transformation in its production, it has become impossible to read the text as a standard written account.

The word “flatulence” generally refers to the accumulation of gas in the bowels. However, when related to language, it refers to inflated and pretentious speech or writing. The change from flatulence to flatulance could be read as a spoof on Derrida’s “différance”, hence eluding to his critical stance toward text and meaning. Morphologically, the spelling with “a” could also be seen as making the word seem more ‘French’ and hence seeming more lofty, like so many words of French origin in English. A concern with abjection (as that state where we become aware of our own “corporeal reality” or what is self and what is other) could also be read into the title. As bodily gas contained within the body, perhaps metaphorically it suggests a kind of incorporeal abjection, which occurs even before it has been cast off. Making us feel uncomfortable and estranged, when turbulent and still inside. 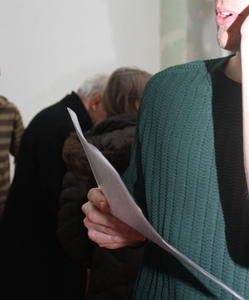 Infocommunicative Processes was a collaboration between myself, Sunette Viljoen and Fumiko Kikuchi. The conception for this site-specific work started with a rundown showroom that we declared a found space. The overarching interests lay in communicative and material processes and their results, the loss of information, lapses in comprehension and conjecture. Embedded within the event was another collaboration between myself and Kikuchi, as well as the respective yet interrelated positions and works by each one of the participating artists.

Viljoen responded to the worn walls with a cladding installation that pointed to traces of production and which set the scene for the collaborative event by myself and Kikuchi, entitled Co-text 25.11.15, 19:00-22:00. As visitors arrived, Kikuchi and I intervened their viewing of the exhibition with our respective modes of communicative interaction. Parallel to our interventions, an array of interruptions and buzzing flow of activity formed part of the work. Two performer assistants executed abstracted tasks that in themselves challenged discourse and communication, but also, in conjunction with the interventions, functioned as a layer of meta-confusion.

My intervention, In Our Time, made use of the wall as an abstract subject for gestural interaction. A partly-memorized, jargon-filled English lexicon, that had been derived from various academic podcasts, was used a source for intuitive verbal utterance in the instance of conversation with visitors. The result was a form of linguistic eloquence that was deprived of its semantic expectations.

of Antas, Saudade and tracing the hours 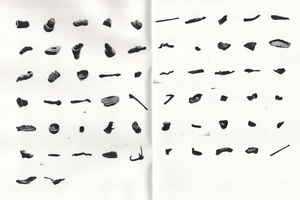 On the floor of the exhibition space lay a heap of black ceramic objects, a box of latex gloves, a few sheets of paper with text on them, and a small plinth with booklets on it. Rivas Rivas and I arrived, we put on our latex gloves and sat down by the ceramic objects. We began to speak unintelligibly with wild gestures and strenuously kept referring to both the text and the ceramic objects. Rivas Rivas would occasionally get up, take a few of the objects with her and, while I was observing her actions, she would construct texts on the window sill. We then returned to the text and the rest of the objects on the floor. This action was repeated for the duration of the performance until the entire text had been translated and all of the ceramic objects had been displaced. 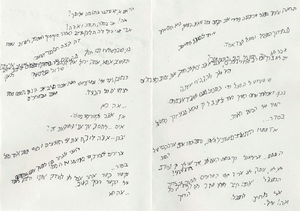 Demonstrative Component was a performance piece that formed part of a larger performative and interventional language event titled JHVH. The event took place on 6 July 2015 as part of my graduate exhibition. The work lasted around 20 minutes and involved myself as performer, as well as six individuals who partook in the interventional / participatory aspects of the language event. The work concerned itself with the language and jargon of ritual and institutional discourse, as well as with distortion, complexity and linguistic failure.

The participants were seated at an oval table, where A5-sized booklets were distributed. I drew attention to the front cover on which the paleo-Hebrew equivalent of the letters ‘JHVH’ was to be seen along with an abstract background image that had been produced through sound visualization. The subtitle reads: “GENESTALGIA in LYRICAL ETYMA: A Multimodal Language Event.” The booklet’s page order is arranged from right to left.

As allocated in the booklet, the language event progressed in three stages, namely the “Demonstrative component”, the “Preparatory component”, and the “Practical component”.

Demonstrative Component was the first section of JHVH and lasted roughly 5 minutes. It started with me withdrawing an old, black mobile phone from my pocket. A number was dialed and the phone was placed on the table. It was on loudspeaker mode and the crackling ring of an international call lingered for some time before being followed by a rehearsed female voice (my mother’s) answering the call in broken, transformed Modern Hebrew. I answered my mother in a similar language form. The dialogue reflected several translations found in the booklet. Some of the participants attempted to follow the various representations of the dialogue in the booklets, while others where just observing the activity and sound production. 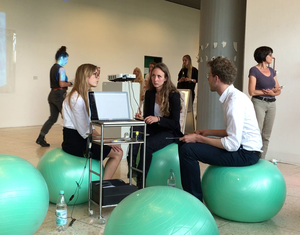 gie was a group show that was arranged by the Kestnerlabor as the 24th “MHH Kestnerschau”. Together with Judith Crasser and Tarik Kentouche, I conceived a site-specific exhibtion for the space at the Hannover Medical School. I presented four interrelated performative intervention-installations, namely VILA, LARA, VIPrA and VIPhA.

Encapsulated in their own entropic system, big, clumsy Pilates balls roam the space. We were able to identify three states there: Firstly, it is the outside where we loose ourselves through external stimuli. Inside we are engulfed in a hyper, internal consciousness. Then lastly, in passing, we experience the alternation between these extremes.

But does it move? The shimmering and shining, frozen hake fillets, I mean. Its vivid materiality imbues the image with dynamism. It is a crystal clear phenomenon that transports us elsewhere—somewhere muddy.

In a parallel realm, lost paper corners dangle from a pillar. What seems to be an attempt at a hyper-systematic elicitation of semantic substance, turns out to be a rather arbitrary process of conjecture. It is a perpetual, autopoietic process of denotation and evaporation—producing thereby semantic fragments and material traces. The knowledge that they were once visual documentations of the space has been lost.

There is yet another painterly system unfolding in the space. Drawn in a rapid, we are not sure whether to float or to sink. Live performers simulate the arcane through interpretative display and their formational movements. The turbulence of perception and signification keeps us afloat.

In order to be able to see the invisible and to be able to understand the incomprehensible, we believe it is important to adopt both a phenomenological and semiotic stance in viewing the gie-nexus.