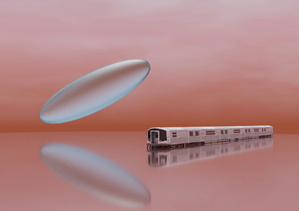 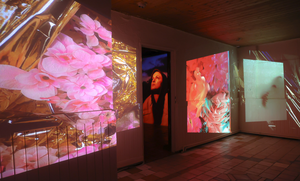 She’s digging through hard soil at the base of a modest tree. She’s pulling clumps of mushrooms from the earth and placing them in her mouth with her thumb and forefinger. Deliberate. Her flesh sits against her bones as if vacuum sealed. Her hair is a miasma of knots. She is naked and shuddering in the cold night air.

Beaten to shreds by sunlight, she traverses the public park where I have sometimes seen her in relative darkness. People amble down the path several yards ahead of me, but I am the only one who sees her. No one is used to seeing skin like hers anymore. She is scaled like a lizard, covered in big, dry, hardened patches which crack and reform and no longer shed. There is dirt caught between the layers. She could be aged like a tree if cut in half.

I do not yet know if she can see me. In truth, I am still uncertain of her humanity. I begin to approach her as if I’m trying not to startle a cat. After my first steps, she turns to face me, slow and deliberate. I see that she is, despite appearances, more like me than something else. I hold out my hand, and when she does not come to it I ask if she needs any help.

For a time she is silent. Then, in warbling but nevertheless clear tones, she says: “Will you bring me my coat?”
And before me is a coat where there was once only grass.

I pick it up and hand it to her. She pulls it around her shoulders and slumps backward onto the ground. I stand there unsure of what to do next until she punches the ground beside her once, hard, and gestures at me to sit with her open palm.

“I want to tell you about something that happened to me,” she says. So I sit and listen.
–

Many years ago she awoke floating atop a sea of people. They stood beneath her and guided her body with their hands. None of them were clothed. When she looked out to see where the ocean of bodies might end, she could see only the tops of heads far into the horizon. She panicked and tried to stand and run across them, but she immediately lost her balance. When she tried to pull herself forward, as if swimming, the people below flipped her onto her back. Paralyzed by fear, she allowed herself to float for a while, letting the hands carry her where they wanted. But soon bodies began to rise from the crowd, and she was no longer the only one lost at sea. She rejoiced, and the hands directed her closer to the new castaways, whom she embraced. And when she did she felt herself grow slick and it was the natural thing to pull them

inside her, or to insert herself inside them. As she did, more bodies rose to join them and the hands beneath pushed them faster and faster. And soon she could not tell herself from others. It was as if her tongue was many, her hands ever multiplying, a hot, pulsating, oppressive and sweet sensation flooding her senses until it all blended into skin: an endless, rolling wall, wet like the inside of a cheek in some places but covered in papules and moles and hair in others. She could not say how long she persisted in this state, whether weeks or decades. But after a time, perception itself started to give way. As her vision was about to give way to nothing but blinding white heat, she hit the ground hard.

I sit with her for a long time after she finishes her story. Just a little beyond us, the halogen lights illuminating a walkway flick off. The park is closed for the night. I wonder where she will sleep but decide I don’t actually care to know.

I ask her why she wanted to tell me all this.

She looks at the dirt before her and picks something out of her teeth. I wonder if she will speak at all. And then she looks at me and says, not out loud, but just in my head:

“I wanted someone to know that things are better for me now.”